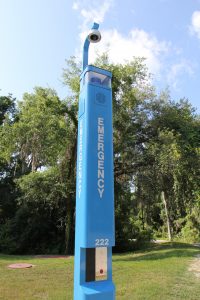 “This project was initiated in the fall semester and was completed before the conclusion of the spring semester despite the disruptions and changing requirements created by the response to the COVID-19 pandemic on campus,” said Public Information Officer Major Brad Barber.

“We came together to quickly respond to the concerns brought up by Student Government,” said Director of Physical Security, Joseph Souza.

Planning, Design, and Construction’s Project Manager Robert Hatker kept the project moving and completed on time. The project took about 5 months to be operational. Orders for the additional blue light phones were placed in mid-December and arrived in April, due to each order being complex and specific to the University’s need. In March, underground electric and communication wires were run to the blue light phone locations to prepare for their arrival.

The technology side of the project was designed by the UFIT Construction Services lead, project manager, Rob Snively. John Madey, UFIT Associate Director, mentioned that “the project to provide additional emergency blue light phones at Fraternity Row includes the use of mass notification speakers that can broadcast emergency messages throughout this area of campus. Also, these locations include the installation of cameras by UF Physical Security and is one of the first locations to use blue light towers for camera mounts.”

The blue light phones are currently operational and can be used. “Security cameras alone are a good resource for enhancing public safety through deterrence, monitoring during special events, and used often for investigating and solving crimes. However, using them as part of an integrated security platform, as we’ve done with these blue light phones, gives us an added capability to respond more efficiently during an emergency. They will certainly help enhance the safety and security of our students, staff, faculty, and visitors,” said Souza.
The University Police Department, Emergency Management, Planning, Design, and Construction, Physical Security, and UF Information Technology were all involved in making the installation and addition come to life.

“We would like to thank the students who demonstrated the care and concern they share for the safety of our community by bringing to our attention the need for these BLPs,” UF Police Chief Linda Stump-Kurnick said. Without knowing students wanted additional blue light phones, the campus would rely on cell phones as being the only resource. Now, in addition to cell phones, the four blue light phones on fraternity row are ready and available for use.