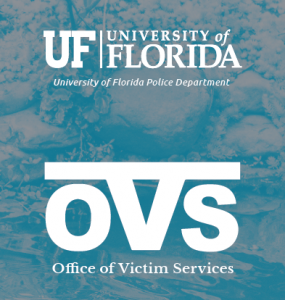 The University of Florida’s Office of Victim Services exists.

That is the first and most important message that the office’s three Victim Advocates–Naomi Harrell, Hailey Brown and Andrea Palmer–would like all members of the UF community to be aware of.

The next message is also simple:

“I want (victims) to start here,” said Harrell, who has been in the OVS since 2014, “because in our role, we have knowledge of all the resources available for victims on campus. If we don’t know, then we know the people who do know. We also know what resources are available off campus.”

Brown, who became a victim advocate in late 2016, said she and her colleagues can provide a wide variety of services to victims, including accompanying victims to the hospital for a forensic exam after a sexual assault, filing for a restraining order on behalf of the victim, assisting with relocation due to sexual or domestic violence, professor accommodations, housing accommodations and much more.

“We serve victims of any crime,” she said, “and that’s students, staff, faculty, visitors to campus and people who are not affiliated but who may become the victim of a crime through a person who is affiliated (with the university).”

“We are the ones who will take them by the hand and walk with them all the way to the end of their journey,” Harrell added. “The journey could end in a week’s time, it could end in two years’ time, however long that takes.”

Harrell said victims can sometimes be reluctant to contact their office, an ongoing challenge for the OVS.

“It’s really important for people to know that they shouldn’t be ashamed,” Harrell said. “There’s nothing to be ashamed of in asking for help, regardless of who they are; a lot of people are embarrassed and for some reason feel the need to apologize when they step into our office.”

While many sizeable universities have an Office of Victim Advocates, UF is unique in that it is housed within the University of Florida Police Department, which Harrell said helps to foster a good working relationship between the OVS and UFPD.

Brown said each morning the victim advocates comb through the previous night’s police reports and reach out to victims. Again, they want the victims to know the office exists and, if nothing else, what his or her rights are in what can be a confusing and complicated process.

Harrell, Brown and Palmer all have backgrounds in social work and said it is rewarding to be able to help people, but in their role as victim advocates, they get to see the fruits of their labor in a way that is not always possible in traditional social work.

“Seeing victims walk in, oftentimes embarrassed, ashamed and frightened, and then sometimes seeing victims walk out with their heads lifted high and feeling hopeful is one of the many rewards as an advocate,” said Palmer, OVS’ newest advocate.

In order to most effectively assist victims and provide necessary resources, a lot of coordination, education and communication must happen within the Office of Victim Services and with various UF audiences as well as the Gainesville community in general.

In addition to working with UFPD, the OVS stays in close contact with UF’s Office of Title IX Compliance, frequently tables at UF events geared toward students and works with many community groups, such as Peaceful Paths, the Alachua County Health Department, the state attorney’s office and various other community-based committees.

“There’s a lot happening in Alachua County,” Harrell said. “There are so many forward-thinking people who care about this community and really want to make a difference, so it is an absolute privilege to be on those committees.”

Brown said the number of victims they see can vary from year to year, but in 2017, they assisted around 350 victims. She said the ideal goal would be zero victims.

“We basically want to work ourselves out a job–that’s the world that we all hope for,” she said.

This article originally appeared in UF at Work.

Tagged as: Office of Victim Services