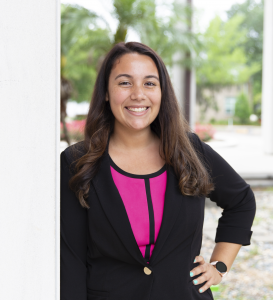 AnaLee Rodriguez started working at the University of Florida in 2017 with TAPS as their marketing specialist. She led the successful Food for Fines program in conjunction with President Fuchs’s April Fools’ prank.

Prior to UF, she was a marketing manager for a master planned community in Tampa, a journalist, an action shot photographer at Disney/ESPN and worked as a graphic designer at the National Basketball Association (NBA Headquarters in New York City).

She enjoys watching sports, painting and car shows. A fun fact about AnaLee is she threw the javelin, discus, shot put and hammer on her university track and field team.